Pay Tribute to a Legend with a Roberto Clemente Jersey 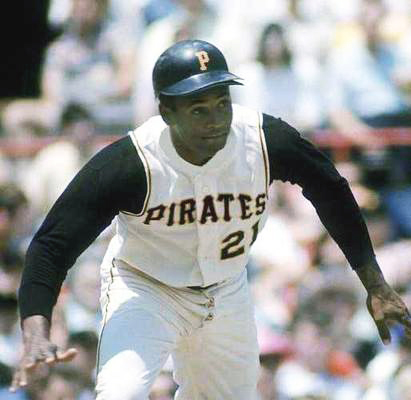 Every sport has its greats. Fans simply love to admire them, and Roberto Clemente tops many lists of fan favorites as one of the greatest players of all time. Not only were his stats as a player impressive, but his humanitarian efforts and his decorations as honors distinguish him as an icon to baseball fans around the world.

Here at Custom Throwback Jerseys, we’re all about honoring sports legends with high quality jerseys reproduced to very precise specifications. Our custom kits capture the details down to the color, the font and the letter - but it’s the reputation and the history of the players themselves that makes all of the effort worth it. A complete player and a hero off the field, we can do justice to his memory with a classic, faithfully reproduced Roberto Clemente jersey.

Roberto Clemente was born Roberto Clemente Walker on August 18, 1934 in the San Anton Barrio of Carolina, a municipality in Northern Puerto Rico. This area of Puerto Rico figures heavily in the sugar cane trade; it only figures that his father was a foreman who oversaw sugar cane cutters and deliveries of construction materials. His mother worked odd jobs, among them labor on a sugar cane plantation, like countless others in the area. Roberto himself was one of seven children, who also worked to help support the family’s needs.

Baseball may not have been in Roberto Clemente Walker’s ancestry, but he took the bull by the horns, even early on in his youth. A hard worker, young Roberto not only helped support the family, but also pursued his own creative interests. He was an avid young athlete, participating not only in recreational baseball, but also in track and field, distinguishing himself with his strength, speed and stamina. Roberto was a well rounded athlete, but it was his interest in baseball that fueled his passion.

His talents playing youth baseball paved the way for him to climb the ladder to the big leagues. Though he played for a minor league in his youth, his talents earned him a position with one of the area’s professional leagues, the Cangrejeros de Santurce. 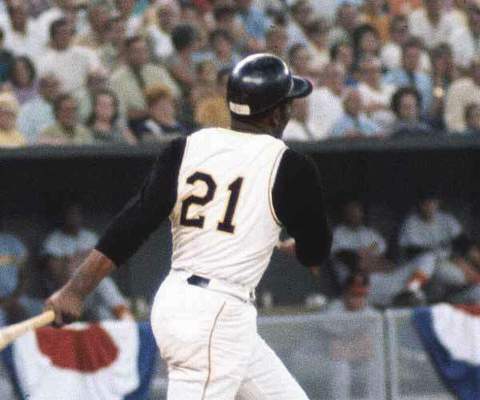 Roberto Clemente’s rise to superstardom in professional baseball began before he even emigrated to the mainland United States. His achievements early on in his career with the Cangrejeros alone distinguish him as one of the greats - let alone the fact that he accepted a contract with them when he was only 18.

That team, which was a member of the Puerto Rican Professional Baseball League, tapped into unprecedented talent when it signed Roberto Clemente. Despite the fact that he was relegated to the bench for his first season, he was added to the starting lineup in his second season, during which time he rose to prominence as one of the team’s top performing batters. In 1954, only two years after he had joined the Puerto Rican Professional Baseball League with the Cangrejeros, they went on to win the Caribbean World Series. Roberto Clemente’s repute as a player was beginning to spread.

In 1954, Clemente signed a contract with the Brooklyn Dodgers, and he also played with the Montreal Royals early on in his career, but it is with the Pittsburgh Pirates that Clemente came into his own and left his mark on Major League Baseball.

During a 1954 scouting trip, Clyde “Sukey” Sukeforth, a pitching coach for the Pittsburgh Pirates, just couldn’t help but take note of Clemente’s athletic abilities. Despite the fact that the Pirates originally were targeting another player in the hopes of signing him, Sukey played no small part in convincing the team’s management to pursue Clemente in the 1954 Rule 5 Draft.

1955 was Roberto Clemente’s first year playing for the Pittsburgh Pirates, during which season he wore the number 13 for the first six weeks, after which point he was assigned the number 21 which has been synonymous with his fame ever since.

Early in his Major League career, Clemente was stifled by stiff athletic competition, racial tension, injuries, and even culture shock, as his first language was Spanish. The Pirates first few seasons after signing Clemente were challenging, but it wasn’t long before he began to gain ground.

By 1960, Clemente’s Major League talents were becoming evident. In the face of a few slow early seasons - several of them losing seasons - his at-bat performance began to take off. In the 1960 season alone, Clemente was at bat 570 times and racked up 179 hits for a batting average of .331. He also scored 89 runs himself and batted in 94 of his teammates. In May 1960, Roberto Clemente was chosen as Major League Baseball’s Player of the Month.

Roberto Clemente was not just a remarkable batter, but a versatile weapon on both sides of the field, distinguishing himself both by his athleticism and his aggressive pursuit of the ball while playing as an outfielder. He would often chase plays so hotly that he nearly injured himself, and in at least one instance, early in his career, he did.

In an August 5 game against the San Francisco Giants in the 1960 season, Roberto Clemente collided with an outfield wall while making a crucial play. This collision was instrumental to the team’s victory in that game - but the injury forced Clemente out of five games. Nonetheless, notable plays like this, coupled with Clemente’s extraordinary batting abilities, were instrumental in securing a winning season for the Pirates in 1960. They went 95-59 and beat out the New York Yankees in the World Series.

Clemente and the Pirates may have one the 1960 World Series, but 1961 was every bit as eventful for him as the preceding season. He adopted a series of changes to his swing in order to make him more effective over the plate - as evidenced by his 1961 stats. He accomplished a nearly outrageous .351 batting average during the 1961 season, scored 100 runs himself and batted in 89 runners.

In the 1961 season, the Yankees took the World Series (over the Cincinnati Reds), but Clemente’s reputation continued to grow, and in 1961 he was presented with his first Rawlings Gold Glove Award. This prestigious award is presented to players in both the National League and the American League that distinguished themselves by their superior or noteworthy athletic abilities. A one time receipt is commendable; Roberto Clemente won 12 over the course of his career.

Roberto Clemente’s performance throughout the 1960s cannot be understated, as he was one of the top-performing Major League Baseball players of that decade. He was an All-Star player in every season except 1968, won 4 NL batting titles, an MVP Award in 1966, and 11 more Gold Glove Awards, for 12 in total. Most significantly, he won a Gold Glove Award each year starting in 1960 and continuing through every following year, until his final season, in 1972.

The 1970s began auspiciously for Roberto Clemente and the Pittsburgh Pirates, despite the fact that he held misgivings about leaving Forbes’ Field. Clemente himself achieved a .352 batting average from 412 at-bats and 145 hits, along with 65 runs and 60 RBI. In 1971, Roberto Clemente managed a .341 batting average and the Pirates went 97-65 in the regular season. They faced stiff competition from the Baltimore Orioles in the 1971 World Series, but defeated them in the seventh game of the series. Roberto Clemente batted .414, distinguished himself in the outfield, and won the year’s World Series Most Valuable Player Award.

1972 was the final season that Roberto Clemente would play with the Pittsburgh Pirates, achieving a batting average of .312 and hitting his 3,000th pitch. He completed the season with the Pirates, and in 102 games he scored 68 runs and batted in 60 runners.

A Brief Insight into the Personal Life of Roberto Clemente

Roberto Clemente was not just a star on the field. He was a generous man devoted to humanitarian causes whose influence off the field was just as positive as it was over the plate. He was proud of his heritage and his accomplishments in the face of adversity and his works indicate that he believed in giving back to the underserved.

Among his charitable ventures was to educate and inspire children. He held “baseball clinics,” whereby he could teach and encourage young children, especially those who were underprivileged, to follow their interests and cultivate their talents. Roberto Clemente also gave freely from his own pocket, offering financial assistance to those he saw in need, especially in Latin American countries and in Puerto Rico.

His charitable nature is not only evident from the assets and assistance he provided to those in need. Roberto Clemente was also a patriot who served in the United States Marine Reserve from 1958 to 1964, offering his services to his country, especially in the off-season.

Roberto Clemente’s charitable contributions lent him to frequent visits to areas in Puerto Rico and elsewhere in Latin America. His untimely death at the age of 38 came as a result of his resolve to visit and provide aid to the survivors of a particularly devastating earthquake that had occurred in Managua, Nicaragua.

Unfortunately, Roberto Clemente was killed in a plane crash on December 31, 1972, when the aircraft carrying him en route to Nicaragua faltered after takeoff. It crashed in the Atlantic Ocean, killing all who were on board.

Although Roberto Clemente’s talent was cut off in its prime, his legacy and his lasting influence are not shy of amazing. He is one of the most decorated, celebrated MLB players that has ever graced the sport, earning the following awards and recognitions (among many, many others):

● In 1973, the Baseball Writers’ Association of America elected to induct Roberto Clemente into the Baseball Hall of Fame. His number, 21, is retired.

● Roberto Clemente won 12 Rawlings Gold Glove Awards for his contributions as an outfielder.

In addition to these awards and honors, the MLB has created a special award known as the Roberto Clemente Award that is presented to players who are exemplary not only for their on-field performance but for their humanitarian efforts.

Do His Memory Justice with a Custom Roberto Clemente Jersey! 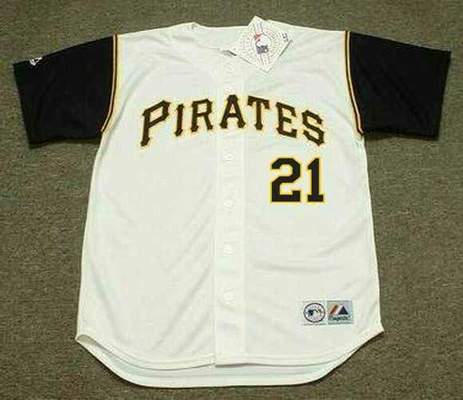 There are few better ways to honor the memory of such a player than with a faithfully reproduced custom jersey, accurate down to the fine details. Our custom reproduction Roberto Clemente jerseys are made with the highest quality Pro Twill fabrics and feature historically accurate colors, fonts, sizes and styles that replicate every detail of the originals as closely as possible. We also put a spotlight on quality, stitching each letter and number onto the jersey directly - there’s no screen printing here.

Complete your tribute collection to the player himself, or just show off your throwback Pittsburgh pride with a Roberto Clemente Jersey - it’s the perfect way to do so. If you have any questions about our jerseys or just want to know what else we offer, feel free to get in touch with us at 800-481-4675 or by email at ctjerseys@aol.com.