Is a Jackie Robinson Jersey The Most Recognizable MLB Jersey of All Time?

When you see a baseball jersey in a crowd and it says 42 you can almost surely guess who’s name they were representing. Jackie Robinson lived such an admirable, memorable, and respected life and left behind a legacy that will never be forgotten. There’s a reason that the Dodgers retired his number, and the entire MLB followed up shortly after. 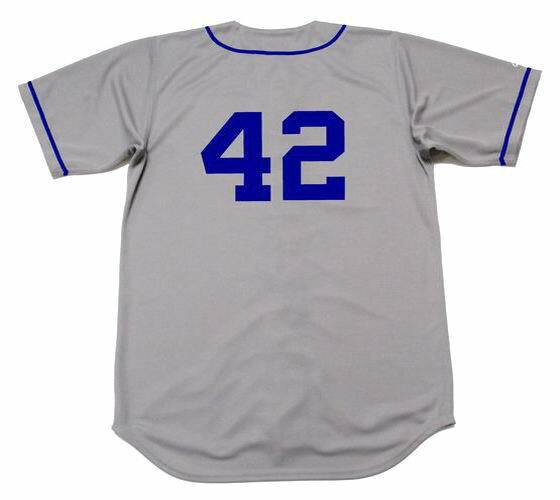 Jackie Robinson is an undisputed legend in the baseball world and beyond. He made history as the first African American to play in Major League Baseball (MLB) in the modern era. He made his starting debut in 1947 when he started at first base for the Brooklyn Dodgers. He later transitioned to second base where he managed to achieve a .980 fielding percentage in 1948 (second in the National League behind Eddie Stanky).

Jackie Robinson helped end baseball’s racial segregation, but that’s not the only reason he was inducted into the baseball hall of fame in 1962. He was also an amazing player when he stepped on the diamond. In his very first year he had an above average .297 batting average. He also led the league in steals and sacrifice hits. These stats combined allowed him to be named rookie of the year.

Throughout his career he went on to make six all-star appearances and play in six world series. He also won his first world championship in 1955 against the New York Yankees. It seemed like he was able to accomplish anything he put his mind to, including a cycle in 1948 against the St. Louis Cardinals. That means he hit a single, a double, a triple, AND a home run within the same game.

Over the past few decades the legend of Jackie Robinson has continued to grow. They’ve made movies and documentaries about his life, his struggles, and his perseverance. Because of all of this he gained fans beyond that of the Brooklyn Dodgers fandom, despite him playing his entire career there. Anywhere you go you can find a Jackie Robinson jersey being worn proudly.

Where to Get a Quality Jackie Robinson Jersey 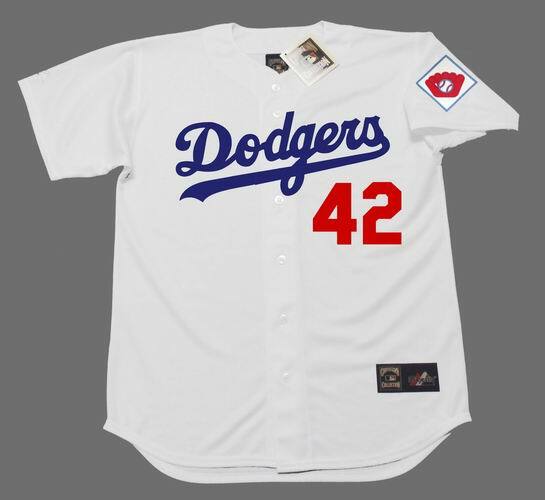 When buying any jersey to represent any sport or player, you need to make sure it’s a quality product. You don’t want to get stuck with a flimsy, knock-off jersey. If you are looking for a top quality MLB jersey it should feature 100% heavyweight fabric, with names, numbers and team logos fully stitched to give it an authentic look and feel. A cheap jersey with logos printed instead of stitched just can’t compete.

Though Jackie Robinson only played on one team through his Major League Baseball career. There are still different variations of his Brooklyn Dodgers jersey out there that you can choose from. You can get the 1950’s white home jerseys that display “Brooklyn'' across the chest and the “B” on the sleeve. The 1951 addition is slightly different with “Dodgers' ' stitched across the chest.

The gray 1955 away Jackie Robinson jersey is another amazing throwback jersey that any baseball fan should have. Custom Throwback Jerseys has all three of these jerseys available from the Cooperstown Collection Throwback Series. Keep in mind that these are the same style jerseys that Jackie Robinson wore while playing for the Brooklyn Dodgers.

Whether you are a Dodgers fan or a Jackie Robinson fan, If you are interested in a custom throwback jersey of this amazing player you should visit customthrowbackjerseys.com. They are known for their high-quality products. Each jersey is crafted to perfection so you won’t have to worry about getting a cheap version that will fall apart in a few months. Get yourself one of the most recognizable jerseys of all time from Custom Throwback Jerseys today!

At Custom Throwback Jerseys, our selection consists of only the greatest players to ever play their respective sports. We carry authentic retro jerseys for every era of baseball, football, hockey, and basketball. Logos, names, and numbers are placed and sewn to precise standards. This means that all of our jerseys look exactly like the originals that [...]

​Honor One of The Greatest Home Run Hitters of All Time with a Ken Griffey Jr. Jersey

Here at Custom Throwback Jerseys, we have some of the highest-quality retro jerseys that you can find online. Regardless of the sport, the league, or the decade, we have a selection of some of the most influential and inspiring athletes in the world. That’s why we take pride in every jersey that we sell.However, today we’re [...]

Pay Tribute to a Legend with a Roberto Clemente Jersey

Every sport has its greats. Fans simply love to admire them, and Roberto Clemente tops many lists of fan favorites as one of the greatest players of all time. Not only were his stats as a player impressive, but his humanitarian efforts and his decorations as honors distinguish him as an icon to baseball fans around [...]

If you’re a Buffalo sports fan and looking to get yourself a Buffalo Sabres Jersey, you may have trouble trying to choose a player. They’ve had some spectacular players over the past 50 years, 9 of which are now NHL Hall of Famers. This list could have been dozens of people long, but we tried to dial it down to three. [...]

The Best NHL Forward Lines of All Time

In the sport of hockey, the forward line is where most of the excitement happens. It’s understandable, then, that hockey tradition tends to assign a memorable collective name to particularly effective forward lines. The annals of the sport is filled with names like the Mafia Line, the KLM Line, the GAG (Goal a Game) Line, the Grumpy Old Men, [...]

There are two things an NHL fan deserves—a vintage and/or custom jersey and a garage man cave. At Custom Throwback Jerseys, we can help with finding your favorite team, number, and colors. We’ve also created this guide to creating a perfect man cave in your garage. It provides a look into what goes into creating a home within your home where [...]

When it comes to the Super Bowl, you never know what you’re going to get. Some Super Bowls are tedious events where everyone just seems to be going through the motions before arriving at a virtually predetermined conclusion. But other games are back-and-forth battles where the momentum keeps shifting from one team to the other. Still other games are [...]

Collecting NFL football jerseys is a rewarding hobby for many sports fans across North America. Given the time and expense that goes into assembling a really first-rate collection, it’s important to do what you can to safeguard your investment. Here we’ll show you how to distinguish a fake jersey from the real thing; how to clean your jerseys in a way [...]

The Most Amazing NFL Stadiums

What makes a great football stadium? For a lot of fans, there’s no place like home—their local stadium is the only place to be. A big part of that has to do with hometown favoritism, which is perfectly understandable. It’s hard to beat the buzzy excitement of finding yourself among thousands of fellow fans on game day. But at the [...]