​Honor One of The Greatest Home Run Hitters of All Time with a Ken Griffey Jr. Jersey 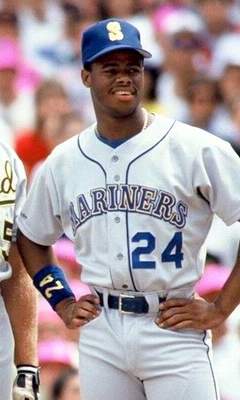 Here at Custom Throwback Jerseys, we have some of the highest-quality retro jerseys that you can find online. Regardless of the sport, the league, or the decade, we have a selection of some of the most influential and inspiring athletes in the world. That’s why we take pride in every jersey that we sell.

However, today we’re not focusing on every jersey on our site. We’re going to be talking about a specific jersey, one that has made an impression on many baseball players and baseball fanatics’ lives: A Ken Griffey Jr. Jersey.

Ken Griffey Jr., also known as “The Kid”, was one of the greatest to ever play the game of baseball, but he’s inspired more than just fans of the game he’s an inspiration as a human being. He overcame hardships that many people struggle to face themselves and he had to overcome a lot to make it to the MLB.

Ken Griffey Jr.’s journey started in Pennsylvania where he grew up before moving to Cincinnati because his father got a job there. That job just happened to be playing outfield for the Cincinnati Reds. So, since Ken Jr. was young he had a lot to live up to. Having a love for baseball, and having a father playing in the Major Leagues was a lot of pressure on The Kid.

His father wasn’t just a major league player, he was a world champion. Ken Griffey Jr. sat in the clubhouse for his father’s back-to-back World Series wins in 1975 and 1976. Though Ken Jr. grew up with a love for baseball he also played football. After playing wide receiver for his high school he received scholarship offers from Michigan and Oklahoma. This just goes to show how amazing of an athlete he truly was.

After high school, he was drafted by the Seattle Mariners but he first played in the Minor Leagues from ‘87 to ‘88. Not surprisingly, he led his team with 13 steals, 40 RBIs, and 14 home runs. In 1988 Ken Jr., made, what he believes, is one of the biggest mistakes of his life. Due to the pressure from his father and the world he attempted suicide.

Luckily Ken Jr. survived and made a full recovery. This eventually rekindled his relationship with his father and the very next year he joined the majors with the Seattle Mariners. Ken Jr. is an inspiration to anyone that’s ever suffered from depression or any suicidal thoughts. Ken Griffey Jr. has become a major role model to many and his successful MLB career is all the motivation you need to realize that something better may be right around the corner. His success story is the reason many fans around the world sport a Ken Griffey Jr. jersey.

The man, the myth, the legend, Ken Griffey Jr. played major league baseball for 22 years before retiring. He started his journey in Seattle, before living up to his father’s legacy and returning to his hometown to play for the Cincinnati Reds in 2000. He also spent a short amount of time with the White Sox in 2008. After that, he finally ended his career right where he started, with the Seattle Mariners.

Because of his extensive and successful baseball career, there are many different Ken Griffey Jr. jerseys to choose from. He played during three different decades and sported jerseys from all of those eras. Whether you want a jersey from his beginning years or something closer to the end of his career you can find them all on our site. He was a talented athlete throughout the many years that he played, so there’s really no wrong way to go. 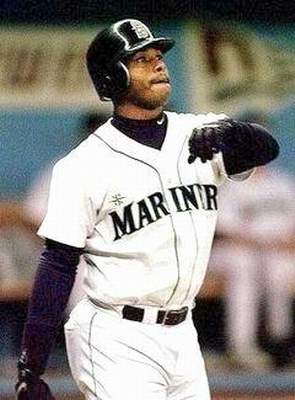 In 1989, Ken Jr. stepped up to bat for the Seattle Mariners, making his very first MLB appearance. During his first at-bat, he drilled a line-drive double. It didn’t take him more than a week to hit his first home run. After a start like that, it’s not probably not hard to believe he went on to have an unforgettable rookie season.

The next year Ken Jr.’s father joined the Mariners as well, making them the first father-son duo to ever play together. You know what they say: “like father, like son”. Ken Sr.’s first at-bat as a Mariner was a single and his son hit a single as well in the same inning, both of them scoring in their first inning together in a professional setting.

Those two were a force to be reckoned with. They both had a very amazing season and they even had another father-son first when they hit back-to-back home runs later that year. A crowd is already electrified after a home run. You can only imagine how the crowd erupted when they hit those home runs right after another. Mariners fans were on top of the world. After that season Ken Griffey Sr. retired from baseball, going out after accomplishing a great deal.

Ken Griffey Jr. went on to play for the Mariners for 11 seasons. In that time he accomplished a great deal for both himself and the team. He got 1,752 hits, 398 home runs, 1, 152 RBIs, and 167 stolen bases. For four of those 11 seasons he led the American League in home runs and in ‘97 he was voted American League MVP.

Ken Griffey Jr. may have been a stud of an athlete and one of the greatest MLB players of all time, but there were still some traits he shared with the average man. His love for his family was one of them. That’s what aided in his decision to head back to Cincinnati where he grew up and play for the Reds just like his father before him.

Because of his father, he already had a bit of a legacy behind him, the fans adored him, and now he could spend a bit more time with the people he loves. Though Ken Griffey Jr. wore a #24 jersey during his MLB career with the Mariners, he couldn’t do so in Cincinnati because it was already retired to honor Tony Perez. He instead decided to switch to number 30, the same number his father wore.

In the first half of his career with the Reds, Ken Griffey Jr. faced several season-ending injuries. For reasons beyond his control, Ken Jr. had a lower output than what was usually expected of him. Even with the injuries, Ken still put up decent numbers but wasn’t able to live up to his previous performance.

Though those years were rough for Ken Jr. there was an amazing moment that will never be lost in history. On Father’s Day, 2004, Ken Griffey Sr. went to see his son play that day. When Ken Griffey Jr. stepped up to the plate and hit his 500th home run in the MLB. Not only that but that homer also happened to be the 2,143rd hit of his career, tying his father in career hits. A number of coincidences that many can only chalk up to fate.

In 2005 he finally managed to get over many of the injuries that ailed him. He hit more home runs than he did since he started with the Reds. After a 35 home run season, he was tied with one of the all-time greats, Mickey Mantle, for most career home runs. The next year he faced, yet another injury, but that didn’t stop him from hitting a home run to surpass Mickey and gain him spot #11 on the all-time home runs list.

In 2007, Ken Griffey Jr.’s jersey was no longer #30. He made switched his Cincinnati Reds jersey from #30 to #3. Ken Jr. was switching over from centerfield to right field and felt like it was the perfect time for a number change. Being the loving family man that he was, he picked the number 3 to represent his 3 kids.

That same year he wore another well-known number for one game only, #42. The number 42 on his jersey to honor someone is considered THE most influential player by many, especially the black community. That man was Jackie Robinson the first black major league baseball player. Wearing the #24 on this day turned into quite the tradition throughout the MLB. It is now known as Jackie Robinson Day.

He continued making his way down the all-time home runs list that year and eventually passed #6 on the list, Frank Robinson, to take his place. Though his Reds career was riddled with injuries, there is no one that watched Ken Griffey Jr. play that can argue with the power behind his swing. He was an absolute beast behind the plate and even hit the warehouse beyond the wall at Oriole park earlier in his career. He is the only player to ever accomplish that feat.

Getting back on track, Ken Griffey Jr.’s time in Cincinnati was coming to a close. In 2008 before he left the Reds he had to say goodbye the only way he knew how. In his very last game in a Cincinnati Reds jersey, he hit it right out of the park, giving him his 608th total career home run. Leave it to The Kid to go out in style.

This section of his life will not as long as the other because his time spent in Chicago did not last very long. In ‘08, Ken Jr. was traded to the Chicago White Sox. Though the man clearly knew how to leave in style, he also knew how to make an entrance. He went 2-3 with 2 RBIs and a run in his first game with the White Sox. After his time with the White Sox, he became a free agent for the first time in his professional career.Baseball Retirement

Ken Jr.’s career went full-circle and after his brief year with the Chicago White Sox, he decided to end his career right where he started, with the Seattle Mariners. He was welcomed back with open arms and the Mariners retired his number 24 jersey. He was also inducted into the Mariners Hall of Fame. 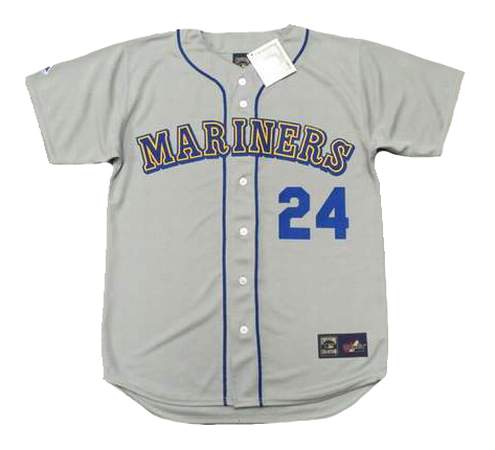 Get Yourself a Ken Griffey Jr. Jersey

Ken Griffey Jr., also known as “The Kid”, was one of the greatest to ever play the game of baseball. He is an absolute legend whose 22 years in the MLB earned him a rightful spot in the hall of fame. The 13-time All-Star has the seventh-most home runs in baseball history as well. He hit 630 home runs by the time he hung up his jersey.

His outlandish statistics went further though, and he is tied for the record of most consecutive games with a home run. He and two others (Don Mattingly and Dale Young) went eight games without having played a game in which they didn’t hit a homer. His fantastic baseball career didn’t stop at the plate either. He was an absolute master in the outfield. He won 10 Gold Glove Awards for his time spent in center field.

Whether you know him for his powerful swing, his terrific defending skills, his Super Nintendo Video Game, or any of the various other things he became famous for, you probably want to honor him with an authentic throwback jersey. You can find a number of the jerseys he wore over the years right here on our site.

You can purchase a Ken Griffey Jr. Mariners jersey, a Reds jersey, or a White Sox Jersey. A man of numbers you can pick between 3, 30, 24, or even 17. Represent one of the all-time greats with any era’s jersey you can imagine. Our jerseys are all 100% officially licensed and made to look identical to the version that The Kid wore on the field. Get your own Ken Griffey Jr. jersey today.