Posted by Custom Throwback Jerseys on 5th May 2021

If you’re a Buffalo sports fan and looking to get yourself a Buffalo Sabres Jersey, you may have trouble trying to choose a player. They’ve had some spectacular players over the past 50 years, 9 of which are now NHL Hall of Famers. This list could have been dozens of people long, but we tried to dial it down to three. Here are some of the greatest players to ever play for the Buffalo Sabres. 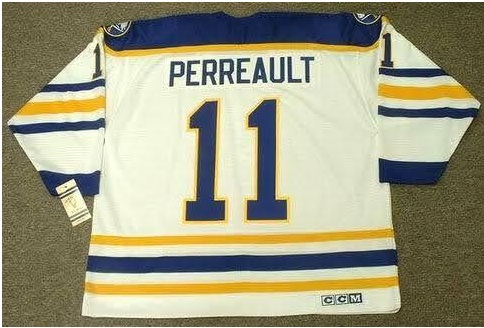 In 1970, when the Buffalo Sabres were established they used their first pick to get Gilbert Perreault, making him the first player to ever be drafted to the Buffalo Sabres. A majority of the time, being the first is an accomplishment enough to get you into the record books, but Perreault didn’t settle for just that.

He spent 17 seasons with the Buffalo Sabres and scored over 500 goals and 800 assists. If you are looking for another # 11 Buffalo Sabres Jersey other than Gilbert Perreault’s you won’t find one. After his stellar career, the Sabres retired his number in his honor and because he was with the team since their inception, no other Sabres player ever wore a number 11 jersey.

A Gilbert Perreault jersey not only represents an important piece of Buffalo history but honors an absolutely magnificent player. Known for his stickhandling ability, he became one the most skillful play makers of his time. He holds Sabres records for most goals in a single game, the first powerplay goal, and the first hat trick. A Gilbert Perreault jersey hangs in both the Buffalo Sabres Hall of Fame as well as the NHL Hall of Fame. 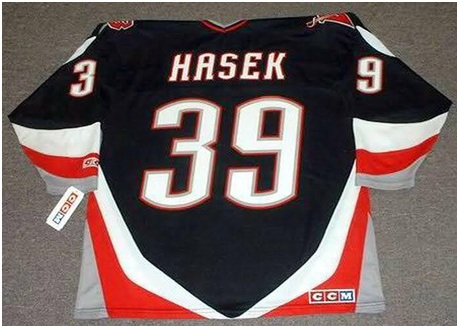 If you are a Sabres fan who’s looking for a goalie jersey then you can’t go wrong with a Dominik Hasek jersey. He was undoubtedly the greatest Buffalo Sabres goaltender of all time. Forget Buffalo Sabres fandom, many NHL fans, in general, believe that he was the greatest goalie to ever don the pads. “The Dominator” as many called him started his 16-year career with the Chicago Blackhawks in 1990, but made his reputation as a Buffalo Sabre beginning in 1992.

He sported a number 39 blue and gold jersey for 9 seasons and in that time he established himself as a Buffalo legend. During this time he made 6 first-team all-star appearances and was even named the best goaltender in the Olympic games. This NHL Hall of Famer was the only goaltender to face the most shots per 60 minutes in a season while also having the most saves in that same season… and he did it twice with the Sabres in ‘96 and ‘98.

Hasek was certainly an unconventional player. His “flopping” style had him saving shots in ways never before seen. His quickness and strange style of play made him one of the most fun NHL players to watch. A Dominik Hasek jersey will never go out of style. His Red Wings jersey, Blackhawks jersey, Senators jersey, and Sabres jersey are all available on our site in an authentic style that stays true to the jerseys he played in during those years. 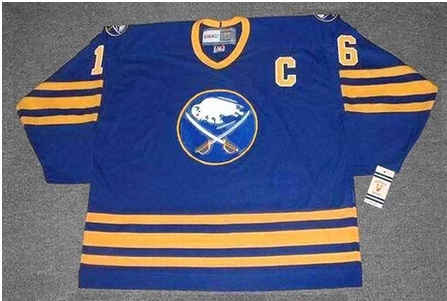 You can’t complete a list of legendary Buffalo Sabres players without including Pat LaFontaine. He was another amazing center that the Sabres were blessed to have. LaFontaine started his NHL career with the New York Islanders in 1983 and didn’t join the Sabres until 91. During his NHL career, he was selected for 5 different all-star games.

Pat LaFontaine started out his career with a bang, representing The United States in the Olympics in ‘84 and then playing in the Stanley Cup Finals that same year. For most, it would be all downhill from there, but LaFontaine managed to prove that he wasn’t just a one-hit-wonder. With 468 goals and 1,013 points, Pat LaFontaine made his way to the NHL Hall of Fame.

Pat LaFontaine wore a number 16 Buffalo Sabres jersey, carrying over his number from his time with the Islanders. Being one of only five players to play for all three New York-based NHL teams, he obviously made a name for himself in that state. If you are a New York hockey fan or just a fan of the amazing player that he was, get yourself a Pat LaFontaine jersey.

At Custom Throwback Jerseys we have officially licensed jerseys available that are identical to the jerseys your favorite players wore in the past. There is no better place online to find a Buffalo Sabres Jersey. We offer several jersey styles that are all durable and built to last. Unlike other cheap rip-offs, the names and numbers on our jerseys are fully sewn on, and customized in the exact colors and fonts of what each team wore on the ice. Enjoy high-quality products and get your next hockey jersey from us.